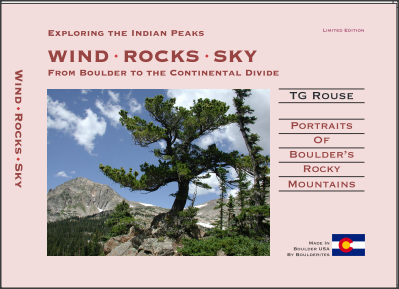 The first-ever photo book of the Indian Peaks Wilderness and nearby area launched on Kickstarter September 1.

Fourteen years in the making, the Indian Peaks Photo Book: Wind Rocks Sky is an exploration of the mountain area between Boulder and the Continental Divide by photographer TG Rouse.

The Kickstarter campaign period will run until October 1 during which time copies of the book are available as “rewards” to “backers.” The book will not be sold in book stores.

The book is an example of micropublishing: titles in small runs for specialty markets. Made in Boulder by Boulderites with hard-covers bound by Denverites, this book is 100% made in Colorado.