Two Denver Newspaper Guild members, Norma Ruth Ryan and Robert Lindgren, weighed in at the TNG-CWA sector conference in January on the national’s name change from The Newspaper Guild to The NewsGuild.

Just prior to a voice vote in which the “ayes” had it, Lunzer told the 2015 delegates how long he’d wanted the change. 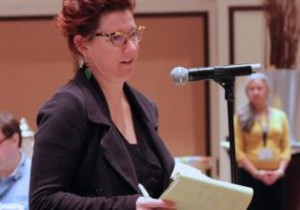 “In 1995, when there was the World Wide Web and the information super highway was coming our way, one of my first actions as secretary-treasurer was to reserve two URLs,” he said. He had no doubt that after the Guild met a couple of months later, the union would be using NewsGuild.org or MediaGuild.org.

He was wrong then, and wrong again several other times the past two decades. This year, he was pretty sure it would pass. Still, he expected more impassioned debate – and not necessarily about the name change itself.

He envisioned a room filled with journalists spending hours arguing the merits of “The” or no “The,” and “NewsGuild” as one word or two.

Ultimately, only Washington-Baltimore’s Mark Pattison raised one of those points, saying the “copy editor in me” would “really prefer a space between ‘News’ and ‘Guild.’”

Of the other six delegates who weighed in, four supported the change and two didn’t – both of them younger members.

Norma Ruth Ryan, a Denver Guild member working for the Denver Area Labor Federation, said that as “one of the millennials” the Guild talks about reaching, the traditional name has heft.

The Newspaper Guild “is a valued and recognized brand,” she said, reading off a list of more generic, modern names – News Corp, New Media, Media News that she pays little attention to. “What I listen to are the traditional and recognized respectable brands.”

Read the rest of the story at NewsGuild.org