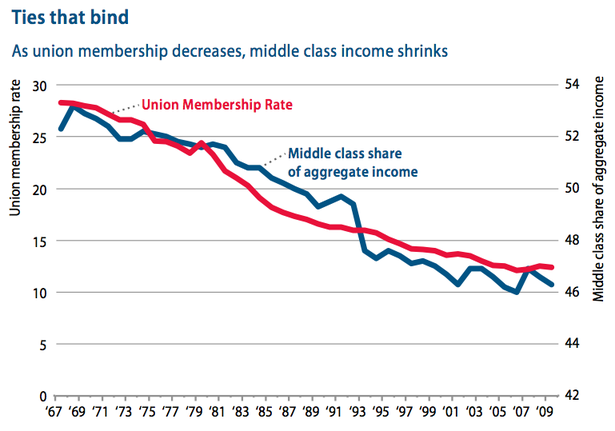 Although it is true that only about 20 percent of American workers are in unions, that 20 percent sets the standards across the board in salaries, benefits and working conditions. If you are making a decent salary in a non-union company, you owe that to the unions. One thing that corporations do not do is give out money out of the goodness of their hearts.

Turning Our Backs on Unions
In his New York Times column, Joe Nocera writes about The Great Divergence, a book about income inequality by Timothy Noah. Noah makes the argument that the decline in middle-class wages corresponds with the decline in union membership. Noah writes, “Draw one line on a graph charting the decline in union membership, then superimpose a second line charting the decline in middle-class income share, and you will find that the two lines are nearly identical.” Nocera writes that this makes perfect sense — “company managements don’t pay workers any more than they have to.”

In their heyday, unions represented a countervailing force that could extract money for its workers that helped keep them in the middle class. Noah notes that a JPMorgan economist calculated that the majority of increased corporate profits between 2000 and 2007 were the result of “reductions in wages and benefits.”

Labor’s Decline and Wage Inequality
Last year in the New York Times, Steven Greenhouse wrote about a study that tied the decline in union influence to an increase in wage inequality. The study’s authors also assert “that the decline of organized labor held down wages in union and nonunion workplaces alike.”

Dems Go AWOL in Class War
In a piece for Politico that appeared in an abridged version on the Post’s opinion pages Sunday, Jonathan Martin writes the decline in populism can be tied in part to the decline of organized labor, and asks, “What the hell ever happened to populism in the Democratic Party?”

Populism — with its rowdy zeal to brawl against economic elites on behalf of the working classes — was for decades the party’s defining cause. … In language that highlights the tameness of contemporary class warfare, FDR railed against “economic royalists” and the “forces of organized greed,” and, of his business opponents, he gloated, “I welcome their hatred.”

Lastly, here’s a table from the Bureau of Labor Statistics that shows median wages by occupation for union and nonunion workers. In 2011, union workers in “arts, design, entertainment, sports, and media occupations” had median wages that were nearly 30 percent higher than their nonunion counterparts.