That is why we, the newsroom of The Denver Post, are outraged at the unconscionable censorship imposed on our now-former editorial page editor, Chuck Plunkett. Chuck told the truth, eloquently and pointedly. And in that our newspaper’s corporate ownership — Digital First Media and the hedge fund Alden Global Capital — saw something to fear, not to champion. 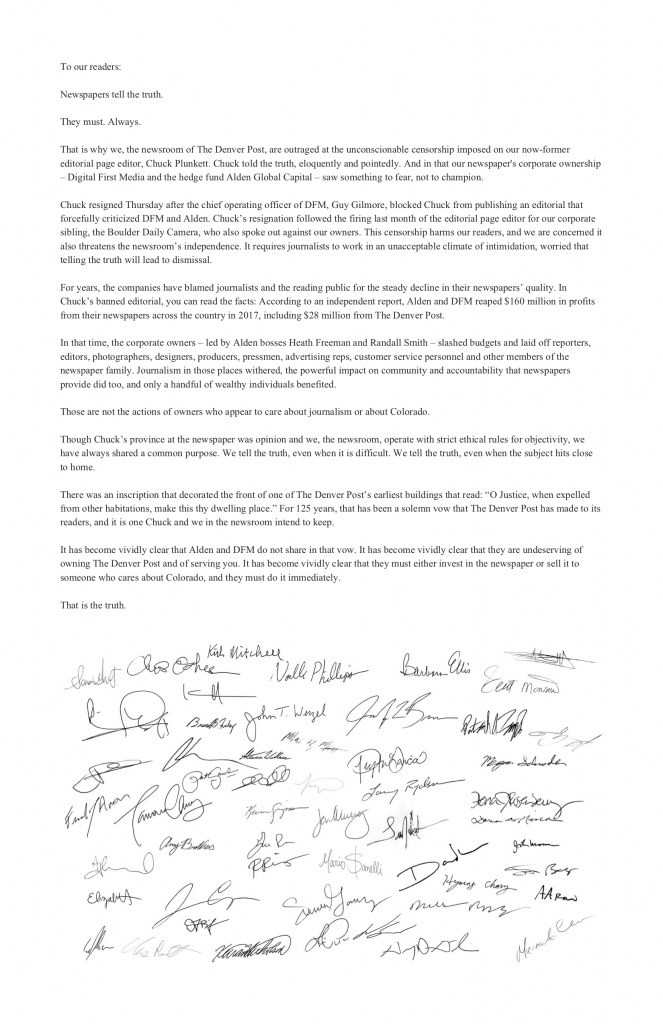 Chuck resigned Thursday after the chief operating officer of DFM, Guy Gilmore, blocked Chuck from publishing an editorial that forcefully criticized DFM and Alden. Chuck’s resignation followed the firing last month of the editorial page editor for our corporate sibling, the Boulder Daily Camera, who also spoke out against our owners. This censorship harms our readers, and we are concerned it also threatens the newsroom’s independence. It requires journalists to work in an unacceptable climate of intimidation, worried that telling the truth will lead to dismissal.

For years, the companies have blamed journalists and the reading public for the steady decline in their newspapers’ quality. In Chuck’s banned editorial, you can read the facts: According to an independent report, Alden and DFM reaped $160 million in profits from their newspapers across the country in 2017, including $28 million from The Denver Post.

In that time, the corporate owners — led by Alden bosses Heath Freeman and Randall Smith — slashed budgets and laid off reporters, editors, photographers, designers, producers, pressmen, advertising reps, customer service personnel and other members of the newspaper family. Journalism in those places withered, the powerful impact on community and accountability that newspapers provide did too, and only a handful of wealthy individuals benefited.

Those are not the actions of owners who appear to care about journalism or about Colorado.

There was an inscription that decorated the front of one of The Denver Post’s earliest buildings that read:

“O Justice, when expelled from other habitations, make this thy dwelling place.”

For 125 years, that has been a solemn vow that The Denver Post has made to its readers, and it is one Chuck and we in the newsroom intend to keep.

That is the truth.